Timing, It Can Kill Your Innovation

In the last years, I’ve being part of many examining boards of startups competitions, I took part in many FIESP’s Concurso ACELERA editions, as well as CNTUR’s, EISE’s and others. I can’t remember how many startups I’ve already analysed. Only in one edition of FIESP’s contest there are almost a thousand projects registered.

Working on that cenario, I have contact with the best of innovation. Many of them have good projects with great professionals and some are invested. But that is not synonym of success. More than a cosmic alignment, Timing is needed.

Many times the public is not prepared for the innovation. Also, if the product and the service depends on agreement with other companies, they may not sign the papers because of clash of interests in business models that are already stablished.

Let’s take for example the Tablet. Everyone knows it for Apple. But it wasn’s Cupertino’s company the first to released it’s concept. Actually, it was a Seattle’s company who first talked about it. That one that is called Microsoft. Have you ever heard of it?

Take a look a Uncle Bill holding a Tablet lauched in 2002. 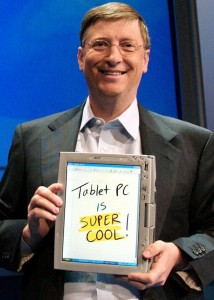 Steve Jobs launched Ipad in 2010. That’s right. 8 years after Microsoft’s announcing their Tablet. But why the concept wasn’t well accepted at that time?

There are many answers for that question. Let’s list just three of them:

Facing it as a natural process of technology evolution is needed. Of course it is tough for the companies to laugh a new concept and see others having more success after relaughing them with improvements.

But success in the world of innovation is relative. The knowledge aquired in the process of development can be used to new projects. And it may help relaugh with improvements a product or service that has already joined the market.

We see that repeating in the Social Network. Myspace was laughed in 2003 and Zuckerberg laughed Facebook in 2004. I don’t have to say who won the battle.

So, if you have laughed an innovative product or service and it hasn’t taken off, maybe it is because of the Timing. But of course, there are many variants and they can be related to the failure of your project. Many times the name or the strategic partner contributed negatively for the project to leverage.

Try to face it as momentary failure. Analyse the scenario and try to understand what happened. Don’t let pride speak louder. If you get to the conclusion that the project wasn’t good, bury it. If you don’t do it, it will bury you.

Remember that the knowledge aquired, the software development rotine, people you’ve met in the process of ideas structuring will give you a great baggage for new flights. The more experienced you are, the more surrounded by people as innovative and talented as you you will be. And quicker you are going to be to take out ideas from the paper.

With flights getting higher and higher, you will get more prepared psycologically for the falls that may eventually occur. No one said the process is easy. You can spend a lifetime laughing new products or services and they may never succeed. But if you never try, what are the chances for something to work?

What is more important is that you will have stories to tell and no one can say you never followed your dreams.

Consider yourself a winner, cause most people are only capable of following other people’s dreams. They are unable to have their own dreams.

Dream alone, dream together with your partner for the same objective, dream simply.

“Success is to dream at night and work during the day, have the feet on the ground and the head in the stars.”

:: Send your comments! It is a pleasure to answer them.

This site uses Akismet to reduce spam. Learn how your comment data is processed.